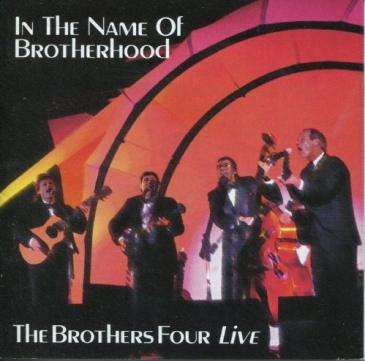 Bob Flick found a treasure in a hidden cave (just kidding) - the last of a special Limited Edition: A live concert recording that has never been marketed or released anywhere else, other than a limited private distribution in Japan.

The recording represents their appearance at the inaugural gathering of the Japan- America Society*. The Brothers Four were invited to participate and present a concert at the first-ever Summit in Kyoto, 1991; the concert featured a guest-performance on a couple of songs by a children"s choir via live satellite hook-up from their Seattle stage.

"The CD is titled after the theme song we wrote for the event, In The Name of Brotherhood, a salute to the tale of one of the very first ever citizens of Japan to have seen America as a young man. A young man who was stranded at sea, rescued by an American whaling ship and taken to Boston where he came of age. He then returned to his native land with news and drawings and tales of America. Actually a really cool saga."
-- BF

*The Japan-America Grassroots Summit is an annual large-scale meeting of Japanese and American citizens, held alternately in Japan and America. The summit aims to strengthen the peaceful relationship between Japan and America by fostering grassroots friendships. The first Summit was held in 1991 in Tokyo & Kyoto, Japan.